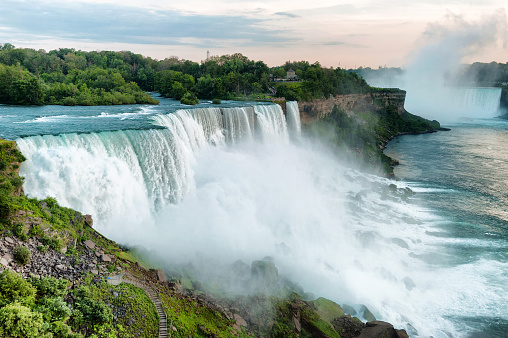 Niagara Falls is one of the most spectacular and famous sights in North America. The US/Canada border bisects the Niagara River and the Falls, and a bridge over the river connects the towns of Niagara Falls, Ontario, and Niagara Falls, New York.

The Canadian side of the Falls is 177 ft. (54 m) high and has a crest 2,200 ft. (671 m) long, forming a deep curve and earning the nickname Horseshoe Falls. The American Falls are higher at 183 ft. (56 m), but are only 1,075 ft. (328 m) wide and somewhat less spectacular due to a rock slide in 1954 that left a number of boulders at the base. Until the 1840s, there was only a small pathway which led to the Falls and tourists did not begin arriving until the railroad made the area accessible to large groups of people.

By 1885, the Ontario Legislature established a commission to preserve the natural beauty of the Falls on the Canadian side of the border. Throughout its history, Niagara Falls has been a place for daredevils who have tried to go over the Falls in barrels and rafts, or even cross them by riding a bicycle on a tightrope. Some of these pranksters survived, but many did not.

Today, the Niagara Falls is a combination of honky-tonk side shows, honeymoon hotels, and awe-inspiring natural beauty.