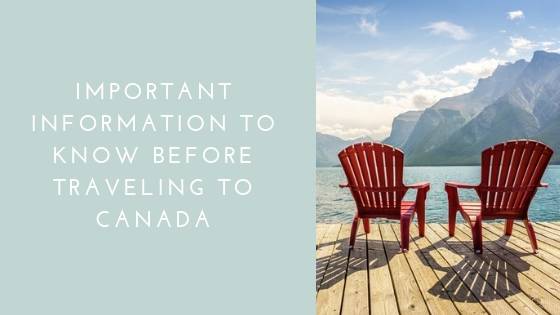 Important Information to Know Before Traveling to Canada

Just because Canada is located adjacent to the United States, it doesn't mean that everything is exactly the same. In fact, in many ways, Canada is very different. Before visiting Canada, here's what you need to know about traveling there.

Because Canada is so large, it is important to figure out where you want to visit while there and have realistic expectations about what you'll actually be able to do. To put things into perspective, the only country in the world larger than Canada is Russia. From coast to coast, Canada covers five different time zones. While known for its scenery and numerous opportunities for outdoor adventures, impossible to see everything in just one trip due to the country's massive size. Many visitors focus on just one area like Ontario, Quebec or the Prairie Provinces.

It's not surprising that since Canada is its own country it also has its own currency. However, many businesses will accept both the U.S. dollar and the Canadian dollar. There are no pennies given in Canada so your total will be rounded up to the nearest nickel. If you will be using a credit card, however, you will be typically charged the right amount, since your bank can convert the dollar by that day's conversion rate. The country does have a $1 coin called a loonie and $2 coin called a toonie. There are bills for $5 and above that match American denominations, but the bills look very different. They are made of plastic, very colorful and smell a little bit like maple.

Knowing the Metric System Can Come in Handy

Canadians use the metric system for all sorts of things. So, if you will be driving in Canada, the speed limit will be posted in kilometers. For reference, you can use a converter to figure out what it will be in miles or simply use your phone's calculator to multiply it by 0.62. The temperature is referred to in Celsius, but if for some reason you will be cooking (maybe you'll be staying in an Airbnb rental), oven temperatures are referred to in Fahrenheit.

A Variety of Delicious Food

Speaking of cooking, you will find all sorts of delicious food in Canada. The one food that is very popular throughout the entire country is the poutine. It is made with french fries covered in gravy and cheese curds. Canada is also known for its game meats and dishes that use all sorts of herbs and even berries in them. Something that surprises many tourists is that there is a large Asian population in British Columbia and you can find some of the world's best Asian cuisine there.