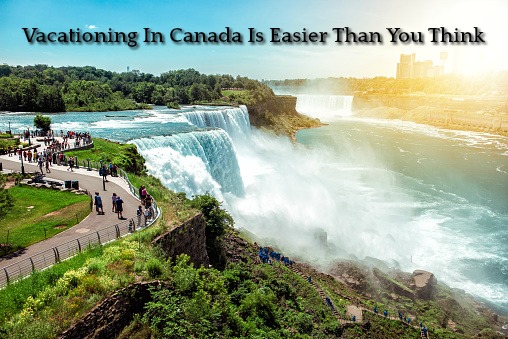 Vacationing In Canada Is Easier Than You Think

Now vacationing in Canada is easier than you think, as we have done all the work for you. Choose from escorted tours of Canada, vacation packages to Canada, rail journeys and cruises. There are so many ways to travel while in Canada. Ride the rails in elegant comfort on a Canadian adventure from Toronto through the Rockies on the popular Trans-Canada by Train tour or the Rocky Mountaineer Escape from Vancouver. Thrill to the excitement of the famous Calgary Stampede. Explore French Canadian history and culture in Quebec. Cruise along the Canada's coasts, lakes and rivers. All this makes Canada one of the most exciting travel destinations in the world. Keep in mind when planning your Canada tour that peak season is May to September as the weather is most enjoyable.. s a province in east-central Canada. It is the only Canadian province that has a predominantly French-speaking population. French is its sole official language. Quebec is Canada's largest province by area. The name Quebec, which comes from the Algonquin word kebec means "where the river narrows". Quebec has four distinct seasons having warm to occasionally hot and humid summers and very cold and snowy winters. The large land wildlife is mainly composed of the white-tailed deer, the moose, the muskox, the Caribou, the American black bear and the Polar bear. Montreal is the largest city in the province of Quebec. Originally called Ville Marie, it is named after Mount Royal, the triple peaked hill in the heart of the city. French is the city's official language. Summers are humid and cool fronts bring crisp windy weather in the early and later parts of summer. Winter is cold, snowy, windy at times and icy. Old Montreal is a historic area southeast of downtown, containing many attractions such as the Old Port of Montreal, Place Jacques-Cartier, Montreal City Hall, the Bonsecours Market, Place d'Armes, Pointe-a-Calliere Museum, the Notre Dame de Montreal Basilica and the Montreal Science Center. You'll find horse-drawn carriages carrying tourists down cobble stone streets. The city today is an important centre of commerce, finance, industry, technology, culture, world affairs and the headquarters of the Montreal Exchange. The most popular sport is ice hockey and the professional team, the Montreal Canadians is one of the original six teams of the NHL. Calgary is a city in the province of Alberta. It is found at the confluence of the Bow River and the Elbow River in the south of the province within the foothills of the Parkland Natural Region and the Grasslands Nature region. Calgary experiences a dry humid climate. It has the warmest winters of all the major prairie cities. The climate is greatly influenced by the city' elevation and proximity to the Rocky Mountains. Calgary has a number of multicultural areas. Forest Lawn is among the most diverse areas wi the neighborhood known as International Avenue. The district is home to many ethnic restaurants and stores. Downtown features an eclectic mix of restaurants and bars, cultural venues, public squares and shopping. In large part due to its proximity to the Rocky Mountains, Calgary is a popular destination for winter sports.Calgary hosted the winter Olympics in 1988 and is now popular for bob sledding, luge, cross country skiing, ski jumping, downhill skiing, snowboarding and some summer sports. The Bow River is very popular for fly-fishing and golf is a major activity. Attractions in Calgary are the Monhas Micro Brewery, Heritage Historical Village, Tellus Spark, Calgary's Science Center, Calaway Amusement Park, the Calgary Zoo, Fort Calgary, Heritage Park Historical Village and don't forget the Calgary Stampede. For generations, the inspirational landscape of Banff has intrigued artists and helped turn Banff into a thriving arts and culture center. Banff is home to Banff Centre and Whyte Museum of the Canadian Rockies. The Town Hall Art Gallery showcases work by local artists. Visit "

Allin the Wild Gallery", Art of Man Gallery and the Banff Park Museum. The Fairmont Banff Springs Hotel was built in 1888 and marked the beginning of tourism in the Canadian Rockies. Hike on the upper ridge of Sulphur Mountain or take the Banff Gondola. While Banff is famous for its wide open wilderness, wildlife and natural beauty, there's still plenty to do indoors at the indoor water slides, climbing wall and swimming pool. Turn to the outdoors for tubing, snowshoeing ice skating and cross country skiing. Vancouver was named the top destination in Canada as the world's most livable city. Vancouver offers travelers outdoor adventure and the sophisticated amenities of a world-class city. While this sea-level city is known for its temperate climate, the surrounding mountains are perfect for winter sports. You can cycle the city or visit the grizzly bears with a guided tour. You can witness the fisherman fishing for salmon and visit the Blue Grouse Estate Winery. escape back in time at the Milner Gardens and Woodlands. Take a breathtaking seaplane ride or ride a segway . There's something for everyone in Vancouver.